ScaleGrid is a database-as-a-service (DaaS) hosting platform for MongoDB and Redis which allows businesses to deploy, monitor, scale, and backup their MongoDB and Redis clusters within the cloud on AWK, Azure, DigitalOcean, VMware, and OpenStack. ScaleGrid is designed for developers to assist their day-to-day workload by automating database operations and optimizing deployments.

With ScaleGrid, businesses and dev teams can manage and monitor their MongoDB and Redis clusters, and save time by automating database monitoring, management, and maintenance tasks. ScaleGrid functions on a database-as-a-service model meaning that users can run applications without worrying about downtime, and scale their database to any size as and when it is required. Automatic backups can be carried out within ScaleGrid for MongoDB and Redis clusters for both dedicated and shared hosting plans, and backup schedules can be created to define intervals at which data should be replicated. 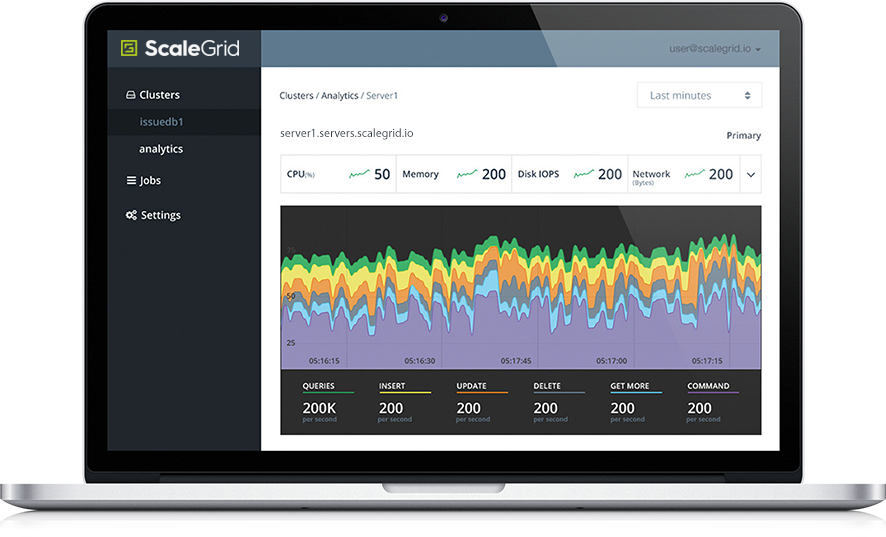 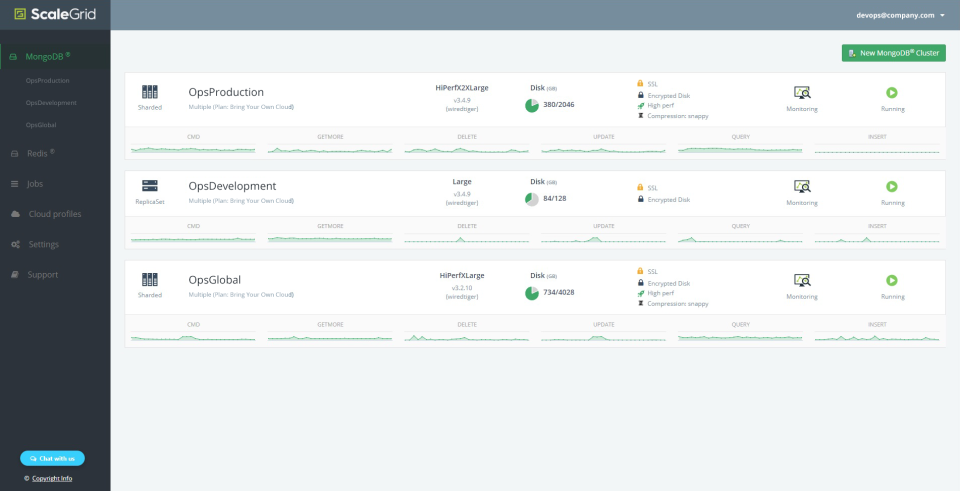 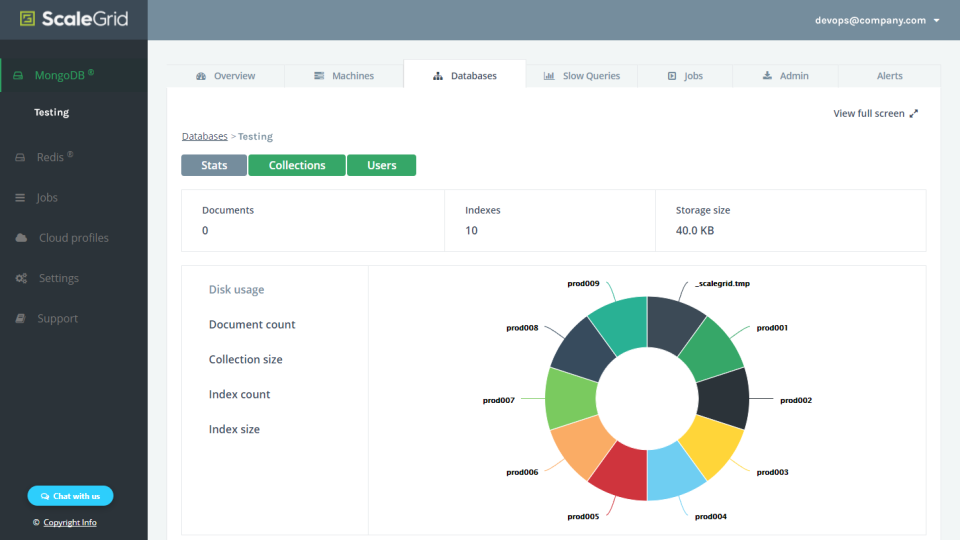 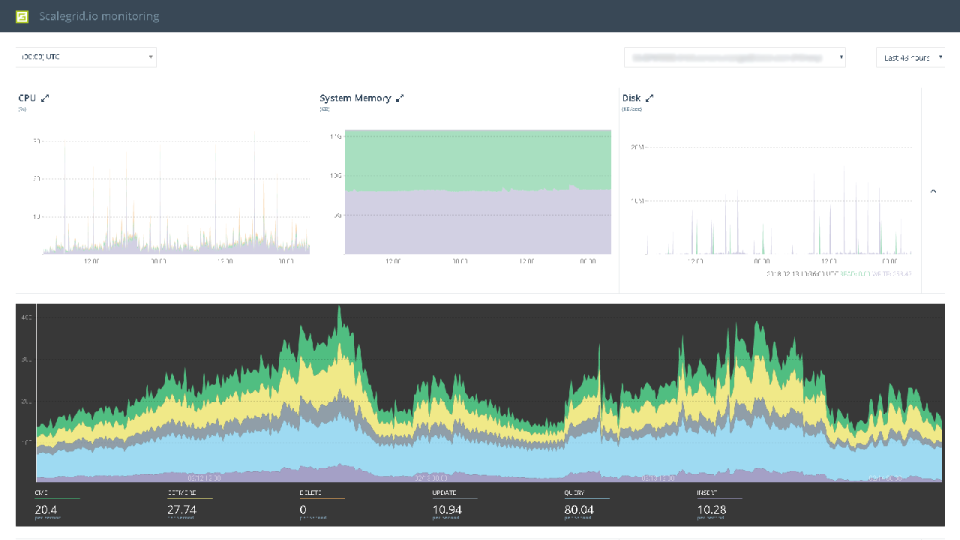 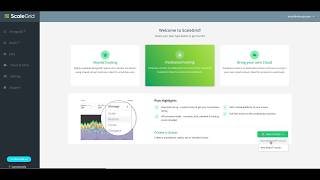 4.8
#2 Alternative to ScaleGrid
Quixy is a cloud-based No Code platform that empowers business users with no coding skills to automate workflows and...
Learn More Compare

I went from a great service from a famous competitor, but too expensive compared to using it for a project and decided to give this software a try. It allows the creation of many database versions on different cloud services and I must admit that at a low price you have an excellent result.

I use the DB on linode instance and it would be nice to have pointing in time backup.

Although I could have spun up yet another database in Azure or AWS, I found during the proof of concept stage that even though it is an Azure or AWS solution that ScaleGrid is managing, the throughput and reliability is much higher.
In fact, it is because ScaleGrid effectively manage the instance for us that I decided to let them take the hassle.

It is slightly more expensive than going direct but the value add of being fully managed and pre-configured was worth the additional spend.

A basic droplet on DigitalOcean/Linode cost $5, while ScaleGrid is at $10, which is fine because...

A basic droplet on DigitalOcean/Linode cost $5, while ScaleGrid is at $10, which is fine because they provide Dbaas.

With the price difference, you are better off using MongoDB Cloud Manager, at $35/server agent.

Spoke to ScaleGrid support, and they said they price this way because that's how DigitalOcean Managed Databases are priced, which I find it quite a laugh. DigitalOcean, as the service provider, also provides the SLA, and automatic failover, while ScaleGrid is basically just... a web interface.

Conclusion: Just overly expensive for the service it's providing.

I'm using MongoDB and it's easy to spin up a database, though it takes about 20 minutes to complete the set up.

Thanks for sharing your experience! Regarding setup, it takes 15-20 mins to spin up a cluster as we create dedicated machines from scratch, saving users 3x the time through automation. Updates/migrations do take time, as these are performed so there is no downtime. We perform encryption at rest using OS encryption based on LUKS - so you don't need MongoDB enterprise for it.

DigitalOcean as a service provider does not provide the services you need for a production database - high availability, backup/restore, monitoring, upgrade, support, etc. A better comparison is against DigitalOcean managed databases where we average 30% more storage for the same price. ScaleGrid is the actual management platform, DigitalOcean is simply the cloud resources offered through our service. If you compare our DBaaS vs. DigitalOcean, you'll see we offer 40% higher throughput and 30% lower latency: https://scalegrid.io/blog/best-mysql-digitalocean-performance-scalegrid-vs-digitalocean-managed-databases/

Great product for my SaaS company

It is extremely reliable. We serve a few million API a month and guarantee 99% uptime to our clients. Scalegrid makes this statistic attainable.

We previously used mlab for our hosted MongoDB needs, but they shut down. Out of all competitors ScaleGrid stood out to us because of their fair pricing and simple setup.

We would have liked to have our test/staging environment on a different cluster. This would double our costs though. Mlab offered free environments for testing. They had very small data allowance, but it was perfect for us. We now had to opt into having our test database live on the same cluster. It's okay, but that could be improved. Accessing backups is also cumbersome. Often I just need to look up something that for instance got deleted by accident. These are small issues and definitely not a deal breaker.

Showing 5 reviews of 68 Read all reviews

Q. What type of pricing plans does ScaleGrid offer?

Q. Who are the typical users of ScaleGrid?

ScaleGrid has the following typical customers:

Q. What languages does ScaleGrid support?

Q. What other apps does ScaleGrid integrate with?

We do not have any information about what integrations ScaleGrid has

Q. What level of support does ScaleGrid offer?