VR shopping adoption in the UK: 4 insights to take into consideration

When you think about virtual reality (VR), one thinks about something rather futuristic, but, in fact, it has been around for quite some time. American computer scientist Ivan Sutherland invented the first headset in 1968  and since then it’s been a long journey for VR.

The use of VR has extended to many industries like gaming or sports throughout the years, however immersive technologies such VR in shopping are experiencing an increase in adoption— especially since some retailers are incorporating the technology into their offering to customers.

Gartner defines it as:

“Virtual reality (VR) provides a computer-generated 3D environment (including both computer graphics and 360-degree video) that surrounds a user and responds to an individual’s actions in a natural way, usually through immersive head-mounted displays.”

Consumers may be familiar with gaming headsets like Oculus Rift or HTC Vive or perhaps have used Samsung VR/Gear or Google Cardboard using a mobile phone.  But who is actually using VR for shopping in the UK?

VR shopping adoption in the UK

We wanted to understand how UK consumers use VR for shopping (or if they do at all), and what is their opinion on the technology.

For this study, we asked 5,080 respondents in Europe (over 1,000 based in the UK)  to also understand if consumers in Europe have adopted VR shopping and what is their view on using this technology to shop.*(full methodology at the bottom of this article)

Highlights of the study:

Below are the 4 key insights from our study that retailers looking to adopt VR software should take into consideration:

#1: A quick look at who uses VR for shopping

The use of VR for shopping is still in its infancy, in the UK only 13% of respondents state having used VR to shop. This is not much different from users that have used augmented reality (AR) in the UK, with 15% of them have used this technology to shop. 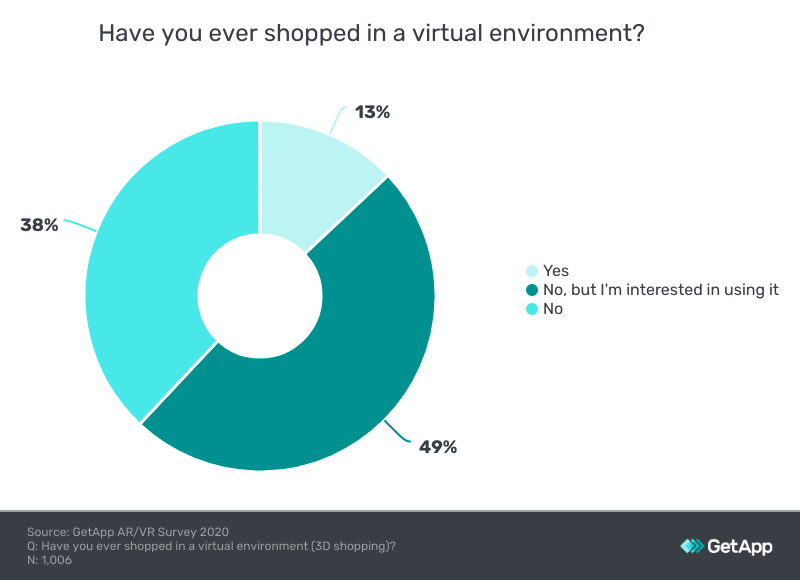 So what does the current user persona look like? Respondents aged between 18 – 45 state having shopped in a virtual environment, 58% are male and the average income is above  £26,000.

Food, drinks and clothes are the most popular items bought using VR

63% of users that have used VR to shop have used it to buy food and drinks, and clothes and accessories (59%). A third of consumers surveyed (34%)  have also used it for real estate virtual visits.

When asked which device they have used for buying using VR, almost half of the users (45%) used dedicated VR glasses and 38% a smartphone with a VR app and a VR headset for the device.

The most popular VR headsets used by consumers in the UK are the Samsung Gear VR (52%) followed by Google Cardboard (17%). In Europe, the Samsung Gear is also popular with users in Germany (43%), Netherlands (49%) and France (36%) using the device for shopping.

Helping to understand the product better with 360º videos

Respondents consider that  360º  videos help understand the product better (60%) and add entertainment to the shopping experience (51%). 44% say it can improve the perception of a brand and 45% state that this content helps to make a better purchase decision.

Looking at who is interested in using VR in the future, there are a number of factors that make for the (possible) VR shopper of the future:

#3: What is the perception of VR shopping by users in the UK?

Consumers would like to use VR to have a similar experience of going to a store but without leaving the house. This is important as shoppers have changed their habits due to the pandemic, being more cautious when looking to go to a physical store and using online shopping instead.

In fact, 60% state that using VR would minimise the risk of infection as there is less interaction with people or trying clothes that someone else has already tried on.

54% of respondents state that the perception of VR and willingness to use it has changed because of COVID-19. Out of these, almost half (45%) state that they are more willing to use it than before the pandemic.

In Spain and France, respondents state that it has changed their perception of VR, perhaps because these countries, as well as the UK have had stronger lockdown measures have pushed people into considering other technology available to shop.

Almost half of UK consumers surveyed (46%) state feeling comfortable or very comfortable using AR and VR formats in the future for most of their shopping. #4: Immersive technologies are here to stay

Our study showed that immersive technology such as and VR are finding a place in society thanks to allowing shoppers to experience the product before buying it.

The pandemic has changed consumer’s shopping habits and has accelerated the adoption of these technologies since they allow more distance. 60% of users state they can have the same shopping experience using VR as they would in a shop.

Providing consumers with a tailored shopping experience where they can shop from the comfort of their home or in a physical store will become pivotal for retailers if they want to stay in line with the latest demands from consumers.

Data for the “GetApp AR/VR Survey 2020” study was collected in August 2020 from an online survey of 5,080 respondents that live in the UK, Germany, France, Spain or The Netherlands.

Out of these, 1,006 participants who qualified to answer in the UK.  The information in this article corresponds to the average of all surveyed participants.

Note: There were several answer options available for the graphics so that the total of the percentages exceeds 100%.

This article may refer to products, programs or services that are not available in your country, or that may be restricted under the laws or regulations of your country. We suggest that you consult the software provider directly for information regarding product availability and compliance with local laws.